We’ve added a new restaurant to our regular weekly list in the last couple of months – Mario’s. I can’t recall exactly why we tried Mario’s for the first time, but it was likely because it is near our church in Farragut and we were looking for something new. The pizza and spaghetti were good enough on our first visit that we happily tried it again, and we’ve been going every week since.

It may be hard to believe, but some pizza joints do really well at other types of food but not pizza. Mario’s isn’t that type of pizza joint. We made the mistake of ordering the Super Mario pizza the first time (like any self-respecting geek could avoid trying it) – and we barely made a dent in it’s gigantic 20 inches. But what we did manage to eat of this enormous pepperoni and sausage pizza was excellent. If we were better about heating up leftovers, we would have had a full second meal just from the pizza alone.

On most visits to Mario’s, we get the Large 14” pizza. We’ve tried many toppings including meatball, bacon, green pepper, and onion. I’m partial to the meatball, especially since it seems like they just slice up the meatballs used in the spaghetti and meatballs. This picture shows one of our regular combos – bacon and pepperoni. 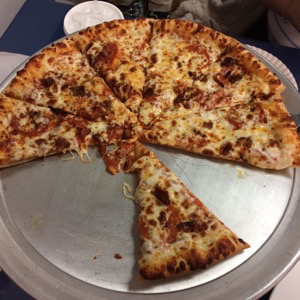 We’ve ordered several of the pasta dishes at Mario’s and liked almost all of them. That first night I ordered the spaghetti and meatballs and it was phenomenal, especially for the price. I’m not even a huge fan of spaghetti, but I’d be happy to eat this by itself as a meal.

The meat lasagna is quite good as well. As is the case with most of the pastas, I’d be happy to order this at another restaurant, but during most visits I’m in the mood for pizza, so pizza is what I order. 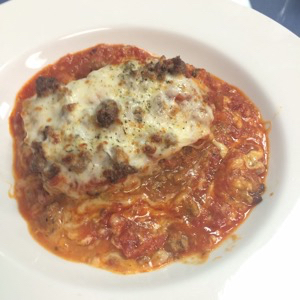 My wife loves chicken parmesan, so she tried that once. I didn’t try it because I don’t care for it, but she assured me it tastes much better than this picture might suggest. She and I are in agreement on what we prefer to order most of the time at Mario’s – pizza – but it isn’t because we don’t like the pasta.

The fettucini alfredo is the only pasta I’ve had at Mario’s that I wouldn’t eat again, but it isn’t because the pasta itself wasn’t good or that the sauce wasn’t a good representation of that kind of alfredo sauce. I’m just not a fan of thick, creamy alfredo, but instead prefer it much lighter – just butter and parmesan would do me fine.

Mario’s serves an appetizer of fried ravioli. I believe we ordered this one night when we weren’t sure about what else we might want, and while it is pretty good, if I were in the mood for an appetizer again, I’d probably go for the cheesy bread, which is outstanding, especially when used to dip Mario’s excellent marinara sauce. 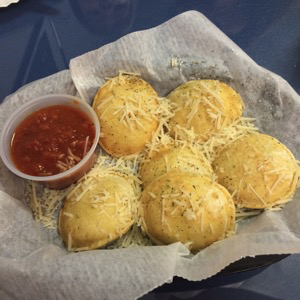 The desserts as Mario’s are outstanding. On that first visit we ordered the cinnamon pizza. It was very good, and we’d get it more often if not for another dessert that’s less work to eat. 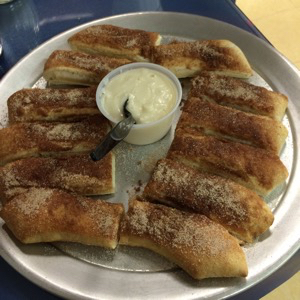 So what’s less work than spreading icing on top of cinnamon pizza? Dipping beignets into chocolate sauce. These little fried balls of joy come out piping hot, covered in powdered sugar, and are delicious with or without the hot chocolate sauce. It’s a good thing these come in a baker’s dozen because that gives us plenty enough to avoid fights at the table.

Why We Keep Coming Back

So you may be asking – has Mario’s earned a regular spot in our dinner rotation simply because the pizza and the rest are very good? Not really. Don’t misunderstand – we wouldn’t keep coming back if the food weren’t also very good. Much like another Knoxville pizza joint, what brings us back to Mario’s is the service. One of the owners, a nice lady, is always happy to see us and pays special attention to our son, who is now three. I recall my mom telling me that when I was still a baby, my dad would tip servers based on how much they made over me. I don’t go that far, but I’ll be honest – making this dad feel like you’re happy my cute little boy is eating at your restaurant is an easy way to push me from just liking to eat at your place to loving it.

One of my friends and her family were visiting from out of town recently and she sent me a message asking me for a quick dinner recommendation for the Turkey Creek area. I pointed her to Mario’s and she let me know they loved it. If you’re in West Knoxville and you’re looking for good pizza and great service, give Mario’s a shot – you won’t be disappointed.