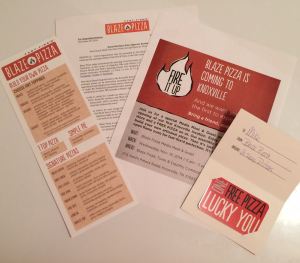 I heard about a new pizza place opening in Knoxville in an unusual way recently. I was contacted by someone at a PR firm saying she liked my blog and was contacting bloggers and other types of media to announce the grand opening of Blaze Pizza. She invited me to a “sneak peak” lunch event for members of the media a couple days before the grand opening, and said they would like it if I wrote a review of the restaurant. Since the location on North Peters Road is just a few minutes from my house, I would have eaten there soon enough and reviewed it anyway, so I let her know I’d be happy to do so. As it turned out, I was out of town on business the day of the sneak peak, so I wasn’t able to attend. We tried to swing by on opening day, but since that was “free pizza day” there was a line wrapped around the side of the building, and while I’m always up for a new dining experience, standing in a huge line with a toddler waiting for dinner isn’t my idea of fun, so we decided to come back the next night. 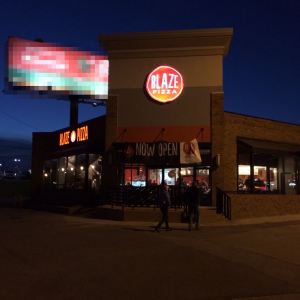 When I saw the location of Blaze, on the corner of North Peters and Kingston Pike, I felt a tiny twinge of worry for them. If you’re familiar with the area, you’ll know several restaurants have tried and failed in that location, including OCI West, some crappy Chinese buffet, and a place called Tradewinds. Given how that particular area has been built up recently, with the giant new Kroger Marketplace, as well as several other businesses between North Peters and Cedar Bluff on Kingston Pike, I’m thinking Blaze may have better luck than the previous occupants of this location. Given the ample parking and high visibility from Kingston Pike, it should be a good spot.

Blaze’s model is “Build Your Own Pizza” taken to an extreme. It’s like Subway or Moe’s does Pizza. Each pizza is of the 11 inch personal variety, and whether you select one of the signature pizzas or build your own, a few different Blaze employees along the pizza assembly line ask you if you’d like to customize it at each station. Once we supervised the construction of our pizzas, we were asked if each looked good, and when we gave our approval, it was whisked away to be quick fired in just 180 seconds in an oven that was over 500 degrees.

For our son we ordered a basic pizza with ham and sausage. He ate plenty of it and I had a slice as well, and it was quite good. The crust was thin and crisp, and light enough to not be too filling.

My wife ordered the Meat Eater. It has pepperoni, meatballs, red onions mozzarella, and red sauce. This was the undisputed favorite of the three we ordered, and I’d be happy to eat it again for lunch or dinner. 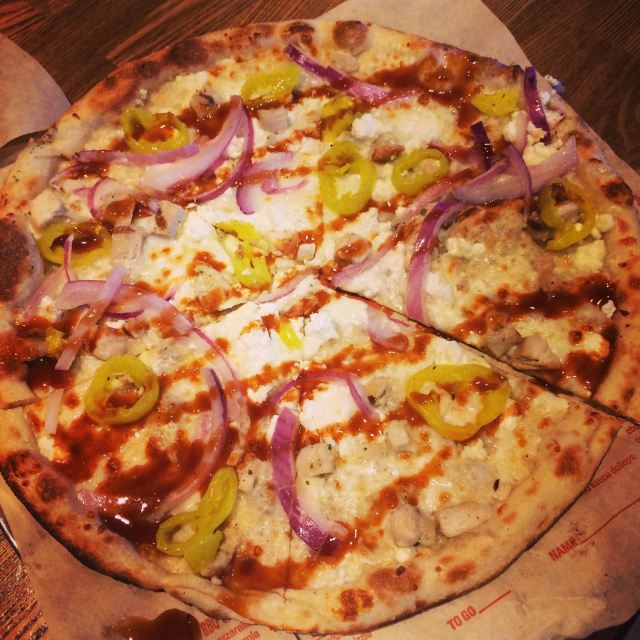 I ordered the BBQ CHKN (that’s the actual spelling on the menu), and it’s normally made up of grilled chicken, mozzarella, red onion, banana peppers, gorgonzola, with a bbq sauce dribble.  I actually like gorgonzola, but for some reason, when the Blaze employee confirmed that I wanted it, since it was a “blue cheese” – I hesitated, and asked him to substitute goat cheese. Even so, the pizza was good. It isn’t the type of pizza I normally order, but I knew I was going to get to sample the meat eater and the ham & sausage pizza, so I went outside more comfort zone. I’m glad I did, and I could see myself ordering this again if I’m in the mood for a less meat-heavy pizza.

Aside from the “artisanal” pizza as Blaze calls it, the rest of the dining experience is pretty close to what you’d expect at a quick service but still sit down restaurant like a Panera Bread. Self-service fountain drinks, and a shelf with shakers of parmesan cheese, crushed pepper flakes, and oregano. This location has plenty of tables, and a mixture of half-booths, tables and chairs, and high-topped tables with tall stools. We were asked by three different Blaze employees, with one of them clearly being the manager on duty or perhaps the franchise owner, how we liked the pizza. It was a nice level of customer service and solicitation for comments, and I hope it continues.

Blaze makes a good pizza for a good price. Each of our pizzas was $7.65, and our total, with soft drinks, milk,  and tax, came to just over $30. I’d recommend it to anyone looking for a good quick meal in West Knoxville.

I’d like to close this review with a disclosure and a teeny tiny contest which, unfortunately, since I’m doing this on the spur of the moment and I’m not experienced in such things, will be limited to folks who live in Knoxville and who are willing to either email me at mike [at] geekfoodcritic.com or leave a comment on the link to this review on Facebook. Blaze sent me two free pizza passes so I could try their pizza at no cost, but they didn’t arrive until after we’d stopped by for dinner. I’m sure nobody believes I’d sell a positive review on my blog for $7.65 x 2, but just in case I’m going to give these passes away to someone else in Knoxville who reads my blog and would like to give Blaze a try. So all you have to do to enter is email me or leave a comment on Facebook saying you’d like a chance to win the passes. You can earn an extra chance by suggesting  a restaurant that I haven’t tried and reviewed yet. I’ll review the comments and emails at noon on Friday, December 5, and assign a number each, then generate a random number within the range of the entries received to select the winner. I’ll contact the winner to get a mailing address and drop the free pizza passes in the mail the next day. Good luck!