We tried a new pizza place last week – Little Nicky’s New York Pizza. We were actually going to eat at a sandwich and ice cream shop next door, but we noticed Little Nicky’s and decided to give it a shot. A “Cash Only” sign was a surprise, and on many nights would have been a deal-breaker, but I’m very glad that I happened to have some cash on me this night. 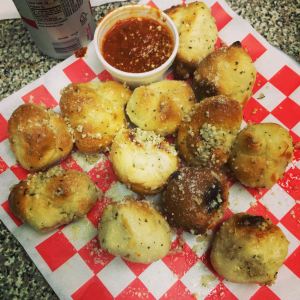 We started off with a dozen Garlic Knots, as one of the employees told us they were awesome and my wife loves garlic knots.  I’m not a huge fan, but I have to admit, these were very good. They were well-cooked and not doughy as so many garlic knots I’ve had have been. They also weren’t drowning in olive oil, and they were covered with just the right amount of minced garlic. The sauce included with the garlic knots was very good too, and I’m fairly certain it was the same sauce used on the pizzas. One neat thing about the garlic knots is that we had a couple left over that we couldn’t finish after we finished most of our pizza. Three firefighters were eating at the table next to ours and, having just finished a truly enormous calzone, they noticed an employee making garlic knots and asked about them. I offered them the two we had left and they gratefully accepted them and enjoyed them as much as we did. 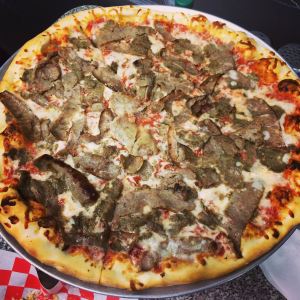 We ordered an 18″ pizza with sausage and meatball as toppings. This pizza, as a whole, was some of the best New York style pizza I’ve had in years, and the best I’ve ever had in Knoxville.

First, the crust was perfect. Thin, just slightly crispy on the outside, soft but not too much so on the inside. I normally don’t eat all the crust on any given slice of pizza, but what I did on every single slice of this pizza was dipping the ends in the sauce from the garlic knots. 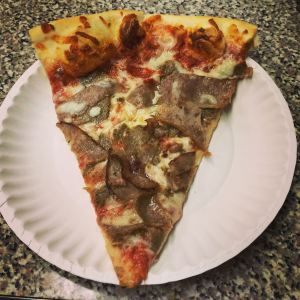 The toppings were good, if a slightly mixed bag. The meatballs were amazing, and I look forward to having them on spaghetti at some point. The sausage I think could have been good, but it was sliced oddly – lengthwise down the sausage instead of across. While I still liked the taste of the sausage, it did make for an oddly crisp texture. My wife commented that she felt the sausage was too spicy, but I wasn’t as bothered by it as she. Keep in mind I keep sprinkle a substantial layer of crushed red pepper on my pizza, so I may not be the best judge of whether something is too spicy. Our son finished an entire slice of pizza on his own, which is very unusual. He usually just picks at the toppings, but he ate both crust and toppings this time. 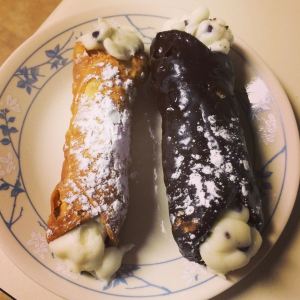 We ordered a pair of cannoli to go. I am not especially fond of cannoli, but my wife loves them. She had the chocolate one and loved it. I had the plain one and liked it as much as I like any cannoli. One thing I can say is that the pastry managed to be crisp and light throughout without getting soggy on the inside from the filling. To me that suggests these cannoli were freshly made. While my wife loved the cannoli, I’m hoping Little Nicky’s branches out at some point and offers a homemade New York cheesecake; that’s one of thing that would have made this extremely good dining experience even better. 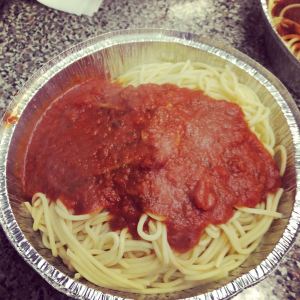 We liked Little Nicky’s so much that we decided to give it another shot a couple of days later, planning on trying their pasta and possibly a sandwich. When we arrived, we learned they had a special running for 2 bowls of spaghetti, 2 medium cheese pizzas, and a dozen garlic knots for $20, so that’s what we ordered. The spaghetti was very good. The sauce was a little plain, but I’m sure I could have added meatballs to it. I will next time.  Our son liked the spaghetti and ate about a quarter of one of the large bowls’ worth. 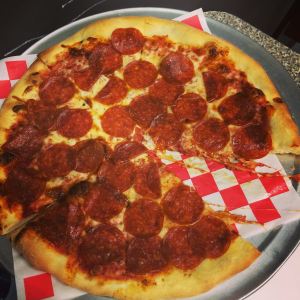 We ordered meatball on one pizza and pepperoni on the other. The meatball was as good as it was the first time and the pepperoni was good as well. The pizza themselves weren’t quite as good as the first trip, although it was still very good pizza. This was a Saturday night and they had several orders queued up before us and received a steady stream of orders for pickup after ours, so I think the person making the pizzas that night just took them out of the oven a few minutes too early. The crust wasn’t perfect like it was on the first trip, and I did end up leaving several pieces of crust uneaten. Still, we were pretty satisfied with the meal overall, and are looking forward to eating there again.

Little Nicky’s is still new, and I’ve had both an outstanding and good experience there so far. If you’re in West Knoxville near North Peters Rd looking for good pizza, give them a shot.