Had to make a trip for work to Spring Hill, TN to roll out a new network, wired and wireless, at our Middle Tennessee Research and Education Center. I didn’t get to pick where we had lunch, so we did something I hate doing while traveling – we ate at a national chain – Applebees. It was predictably terrible.

That night, however, I insisted that we try something other than a chain restaurant. We stayed at a hotel in Columbia, so I asked the desk clerk for a recommendation for a local place to eat, particularly one where my boss could find fairly bland American food. She pointed us to Stan’s Country Restaurant just across the street, and said we were in luck, because that night’s special was All You Can Eat Frog Legs for $9.99.

Stan’s is a lot like a Cracker Barrel in that, in addition to the restaurant, there is a country store and gift shop. Evidently it’s been around since 1947, which is pretty cool. My boss, a coworker, and I sat down to eat with high expectations. My coworker ordered fish and chips and liked his just fine. My boss ordered pork chops and also liked his. Like many Southern restaurants featuring homestyle cooking, Stan’s offers a selection of breads, including fried cornbread. My boss asked for some honey to go with his, and I did the same. It was delicious.

I couldn’t pass up the opportunity to order the special. Frog Legs aren’t my favorite food in the world, but I figured they would be fun to write about, and when I sent my wife an iMessage saying I’d be getting them, her response of “Ewww” was all I needed to seal the deal. The special came with fries (no substitutions) and choice of two sides. I selected green beans and cole slaw. 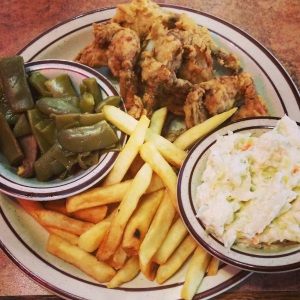 Let me say the cole slaw was not especially to my liking, but I’m a fan of sweeter slaw, and this was not very sweet, so others may like it just fine. The fries were OK, but I wasn’t in the mood for carb overload, so I only tried a few. The green beans were quite good, if a bit bland. That’s my most common complaint about Southern/American food – sometimes there isn’t a ton of flavor. But I know what you’re waiting to read – how were the frog legs? Well, they were frog legs. If you’ve never had frog legs, you’re probably wondering – do they really taste like chicken? In a way. They certainly are somewhat similar to chicken in texture, especially the meat on a chicken wing. I would say if most people were blind-folded and handed some fried frog legs to eat, many would assume they were eating chicken. But were they good? I guess. I’m honest enough to admit I ordered them to be able to say I ordered them and to write about them, but I won’t claim they were so good I’d order them again. I got the “Ewww” from my wife, and the raised eyebrows from my coworkers, and now I’ve written about them. Next time I’m down that way, I’ll probably order fish and chips or fried chicken.

For dessert, I ordered the Blackberry Cobbler. It was good but not amazing. The freshness and texture of the blackberries carried the dish. After passing on additional helpings of frog legs in hopes of getting some good Southern dessert, I was a bit disappointed in the serving size of the cobbler, but in hindsight, it was plenty big enough. 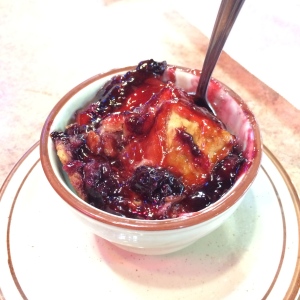 Stan’s Country Restaurant is a neat place. I’m not sure I’d drive all the way over there from Nashville/Hermitage while visiting family, but I will definitely eat there again the next time work brings me to MTREC.

This entry was posted in Eating Out, Review and tagged SBC, Summer Blog Challenge. Bookmark the permalink.