Another day in Nashville means another dinner with my parents. Like me, they love Mexican food. Like Knoxville, there seems to be an abundance of mediocre Mexican food in Nashville. I know of a really good place I hope to visit and review next time I’m in town, but tonight they picked our dinner spot – El Chico on Murfreesboro Road.

I can remember eating at this El Chico off and on for most of my life. I know we used to live in that area of town when I was 5 or 6. I even learned tonight my mom used to wait tables at an upscale steak & bar combo right down the street. My family has a lot of history with this restaurant, which is fairly unusual for us, as most places don’t last 30+ years. I point this out to make it clear that I probably can’t be completely unbiased about this place, both because of family history and because it is one of my parents’ favorite places.

We began tonight’s meal with the Top Shelf Guacamole. Our server showed up at our table with a huge platter filled with bowls containing avacados, tomatoes, jalapenos, onions, a line, and some spices. He mixed the guacamole to our tastes, leaving the jalapenos on the side for me to mix into mine separately. Nothing beats fresh-made guacamole, and while this may not have been the best I’ve ever had, it was some of the best I’ve had in a while, and certainly the best $6 guacamole I’ve period. The chips and included salsa were fairly good. 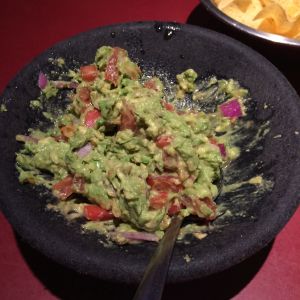 I ordered the Rodeo Combo, which included two beef burritos with sour cream or cheese sauce, a beef taco, rice, and frijoles rancheros. I ordered this in a rush after not paying attention to the menu until my parents were finished ordering. I usually go for chicken-heavy when I eat Mexican, and I probably would have been better served doing that tonight. The burritos were OK, but not awesome. The taco was quite good, with an almost chalupa-like shell, and plenty of avacado and tomatoes. Come to think of it, if I had it to do over, I would have simply ordered three of those tacos. The rice was mostly boring and the frijoles rancheros were decent but nothing to get excited about.

The service was good, but I’d expect that since my parents are regulars. We had a nice conversation about the guacamole coming with a half lime this time as opposed to a quarter last time, and how much the price of limes and tomatoes has impacted the menu over the last several years.

El Chico isn’t the best Mexican to be had in Nashville, but in my experience over many years, including a few times in the last couple of years, they’re predictably decent. Sometimes that’s good enough.

This entry was posted in Eating Out, Nashville, Review and tagged SBC, Summer Blog Challenge. Bookmark the permalink.